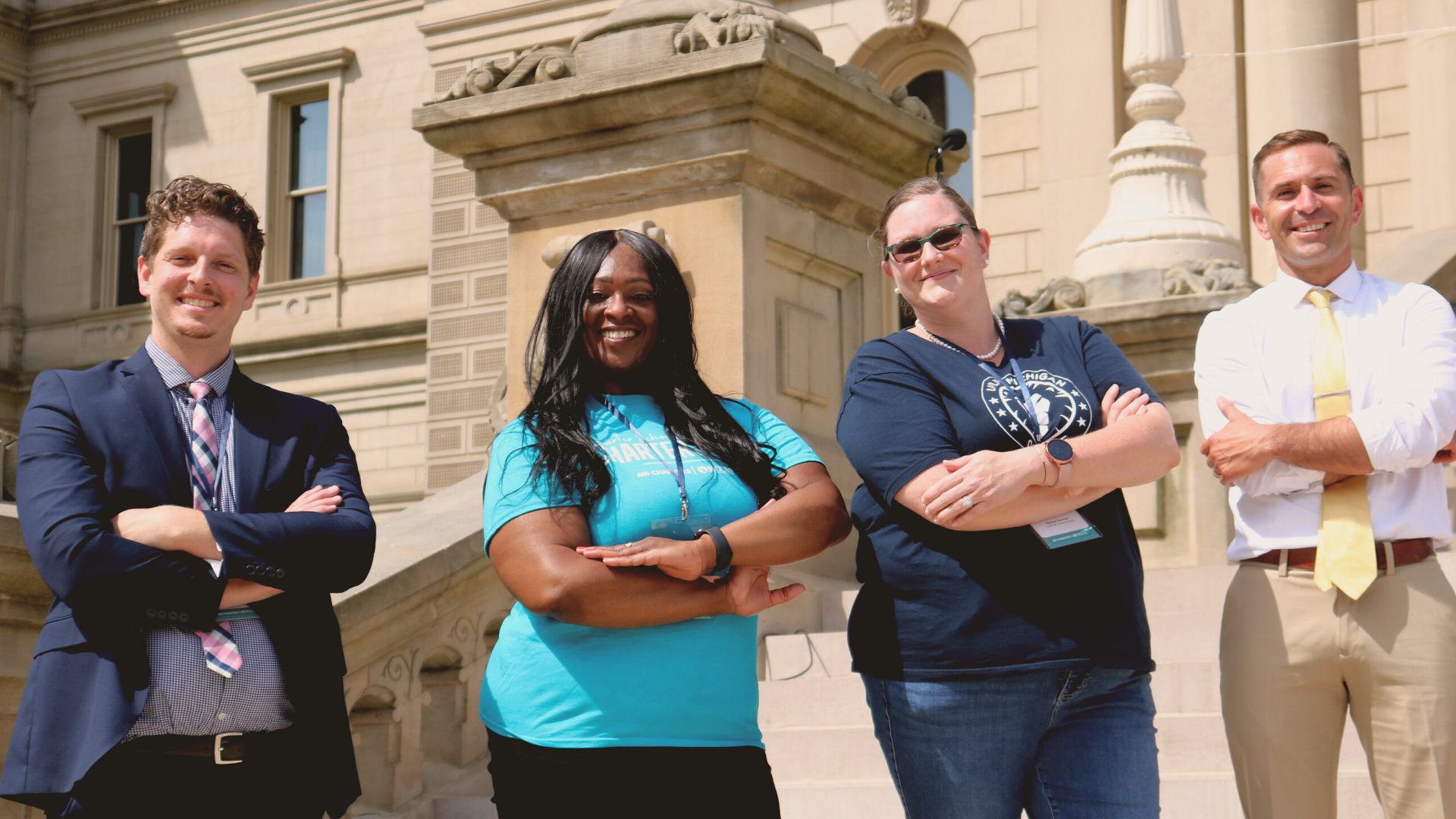 A principal from Marshall and an online instructional coach from a statewide charter school have been named the state’s top charter school educators for 2022.

The Michigan Charter School Teacher and Administrator of the Year awards – the top honors that a charter school educator can receive – are presented each year by MAPSA, Michigan’s charter school association.

Noah Wilson, the director of Marshall Academy, was announced today as the 2022 Michigan Charter School Administrator of the Year. The announcement was made during a surprise assembly at his school this morning in front of the entire school community – students, staff, Wilson’s family, MAPSA staff and other supporters.

Amy Dunlap, an instructional coach and veteran teacher at Michigan Connections Academy, was also announced today as the 2022 Michigan Charter School Teacher of the Year. She was announced as the winner – fittingly – during a surprise Zoom assembly attended by her school community, family, MAPSA staff and others.

The announcement was made public on our Facebook page Friday, May 13 following our winner surprises. You can watch a recap of the events and leave your congratulations in a comment.

Based in Okemos, Michigan Connections Academy is an online charter school with students across the state. Dunlap is the first teacher from an online school to earn the Michigan Charter School Teacher of the Year honor.

“Amy and Noah represent the very best that Michigan has to offer in terms of educational excellence,” said MAPSA President Dan Quisenberry. “The past couple years have been an extraordinarily challenging time for educators across the state, and we’ve been so inspired to see the creative and innovative ways in which teachers and school leaders have met the challenge. That’s certainly been true of Michigan’s charter school educators, and Amy and Noah have been truly exceptional in that regard.”

Born and raised in Marshall, Wilson returned to his hometown and his roots when he realized the impact he could have on students as the director of Marshall Academy. During his four years as the school’s leader, he’s instituted a number of impactful programs at Marshall Academy, including the SOS (Save One Student) mentoring program, in which the school’s neediest and most at-risk students are paired up with a member of the school staff in a one-on-one mentorship.

The other four finalists for the 2022 Michigan Charter School Administrator of the Year award were:

Dunlap, the first online teacher to be honored as the state’s top charter school educator, is an instructional coach, field trip coordinator and mentor coordinator at Michigan Connections Academy.

Dunlap builds on the online curriculum at Michigan Connections Academy by meeting with her students individually, traveling through both peninsulas, and by organizing field trips for students across the state to the Michigan Capitol, Uncle John’s Cider Mill and other locations. Her goal is to make learning come alive for her students.

She has also become a vocal and effective advocate for her students by forming relationships with legislators in both Lansing and Washington, and by helping bring students to the State Capitol every year for National School Choice Week.

The other four finalists for the 2022 Michigan Charter School Teacher of the Year award were: